With the end of the trimester approving the mindset is a mixed bad to say the least. This Week we implemented more on our RTS frame work  we focused on getting building placement’s functional, which will prove useful in the next assignment.

In a RTS like ‘Banished’ you can see this idea of a pre-building placement, with green and red indicators for the placement zones, ‘red’ indicates when the placement is obstructed by another building or unit, and ‘green’ specifies where the building is not obstructing anything

We implement this idea of a pre-building or “ghost”,  which would be on the player’s mouse location, when they were deciding on a location for the building to be placed. Then, when the player had chosen a location for their building to be placed and the pre-building would be replaced with the building model. Many games from the RTS and strategy genre implement this concept of pre-building, for instance the games from blizzard entertainment WarCraft series and Starcraft uses this feature well, and it adds a good scene of player feed back that is intuitive to players scenes.

Animation for our buildings was another feature we touched on. We wanted to create a brief animation movement for the building, so when the player’s click was on a valid location for the building to build, the animation would happen and rest in the final build position . This animation of the building raising out of the ground was a simple example of what was possible, but it does add a little more appeal and visual stimuli for the player, doing this give something for the players to engage with and fell rewarded with this animation otherwise it would be boring for players to engage with.

I’ve been trying to transfer this pre-building and building placement to my final project, and all is going well. Nowto get profection on player to indcate selected players and also resource gathering for players to use to build structures and units.

Animation and Controller support + Unity = “Fun Time for all”.

After a less than ideal experience with control configuration in you during a production group the announcement of this in the weeks content gave some flashbacks. But I come at it with a different outlook. The content covered setting up the xbox360 controller as the input for the side scrolling game and setting up the animations for our new player spider creature making use of the Mecanim tool built into Unity.

New to me Mecanim has different ways that it can be implemented into a unity project.

Here is an example of the tool in unity

Also we covered the implementation of xbox360 controller support of the second player character and having this work without interfering with player one’s input in any way, something that my track record to date wasn’t as good at I’d like it to be. Controller support isn’t necessarily a complex component, but it definitely could be less stressful for developers using the unity game engine, whilst the unity development team has improved upon their game engine in many ways, the confusing Input Manager window is something that will get first using a little confused.

I’ll quickly mention the final assessment for GAM111. We are to develop an isometric RTS or Strategy style of game. Leading into next week’s class (week 10) we have been asked to put some thought into the style of game we want to make for this particular game brief. Ill be leaning toward a “Warcraft 3” style game with more of a survival aspect to the overall goal of the game. Something reminiscent of “Don’t Starve” or “Banished”. 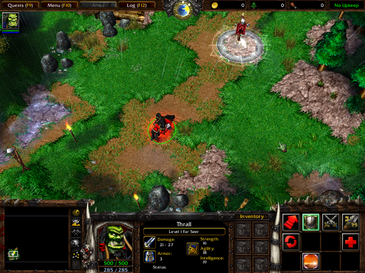 The weeks brief is focusing on State – Driven Side Scroller, this instantly had me reminiscing to old titles like Super Metoird and Wonder Boy 3.

“The player must traverse a 2.5D side scrolling environment, fighting simple AI enemies. The player will control an animated character that can walk, jump and perform a melee attack. Enemies will patrol along platforms by default. If the player is both within line of sight and within an enemy’s aggro range they will instead attack the player. The player wins by either killing all the enemies or getting to the end of the level. “

Across the duration of the tutorial we covered camera functionality and running animation and a state system. Working with animation and states is something that i had never touch on and found it easy to impairment and i feel it can get crazy complex and yield some awesome results.

Next week we’re starting on the final project assessment for the Trimester. Its a top-down 3D Strategy/Economy based game. I looking at making a survival RTS but it’ll be similar to game where you gather resources and time to last as long as you can or to a set time limit, this will cover the games must have main feature. The first being resource based economy, the player will acquired this by harvesting, generating or maintaining. This will lend to the second feature, where the player will be able to place/build structures.